A brief history of the Regiment

The regiment traces its origins to a regiment which was formed on 1 April 1910, when General Order No. 38/10 gave authority to Lieutenant Colonel W.C.G. Armstrong to raise an infantry battalion in Calgary.  The battalion was granted the number 103, and was uniformed and equipped as a Rifle Regiment, adopting the uniform of the 2nd Regiment (Queen’s Own Rifles).  The Regiment was known as the 103rd Regiment (Calgary Rifles).

The raising of the regiment was a culmination of a number of years of work on the part of Lieutenant Colonel Armstrong and the citizens of Calgary who, twice before in 1902 and in 1904, had sought authority to raise a regiment.  Finally, in 1920, approval was given and they carried on as regiment of the Canadian Militia until 1921.

On the 4th Aug 1914, war was declared with Germany.  Canada in support of Great Britain, decided to mobilize an Expeditionary Corp of several divisions.  However, instead of using existing plans, where militia regiments would be mobilized as units, the Minister of Militia, Lieutenant General Sir Sam Hughes, KCB, implemented his own plans to raise numbered battalions.  Thus it was that the 103rd, instead of going to war as a regiment, was called upon to provide 5 companies, along with 3 from the 106th Regiment (Winnipeg Light Infantry) to the 10th Battalion, Canadian Expeditionary Force, to be commanded by Lieutenant Colonel R.L. Boyle of the 15th Light Horse.  The Regiment continued to exist as a Home Service Battalion unit in a recruiting and training role, recruiting for the 50th, 56th, 82nd, 89th, and 137th Battalions, Canadian Expeditionary Force.

The 10th Battalion was raised and received it’s initial training at Valcartier Camp in Quebec, along with the rest of the Canadian Expeditionary Force.  They were initially assigned to the 4th Brigade, along with the 9th, 11th, and 12th Battalions.  In October 1914, the 10th Battalion left for England in the First Contingent.  They arrived on the 14th of Oct 1914 and were sent to a concentration area on the Salisbury Plain.  On the 15th December 1914, they were transferred to the 2nd Brigade to replace the 6th Battalion.  On the 22nd February 1915, the 10th was sent along with the rest of the 1st Division to France and proceeded to occupy the Ploegsteert Sector. For the next four years, the Battalion fought in France and Flanders and formed a part of the occupation forces at the end of the war.  They took part in most of the battles of the Canadian Corps, including the Battle of Vimy Ridge, and earned two Victoria Crosses, 19 Distinguished Service Orders, 64 Military Crosses, 60 Distinguished Conduct Medals, 287 Military Medals, and 819 Mentioned in Dispatches.

On the 22nd April 1915, the Germans attacked the French Colonial troops in the St. Julien area with poison gas and caused them to retreat in disorder.  The 10th Battalion, which was in Divisional reserve, and the 16th Battalion of the 3rd Brigade were ordered to counterattack.  Despite the gas, the two Battalions counterattacked the Germans and succeeded in stabilizing the line, although at the cost of heavy casualties, including the Commanding Officer, Lieutenant Colonel Boyle, who was wounded while with the first wave.  He was killed by shell fire in the Field Dressing station shortly after.  Of the battle, which had been the first major use of gas on the western front, Marshal Foch, the Allies Commander-in-Chief said after the Armistice in 1919:

“I think the finest act of the war was the counter-attack of the 10th and the 16th Battalions of the Canadians after the Divisions had  been so frightfully punished by the German gas.  This counter-attack so amazed the enemy – who counted on the  gas  demoralizing or  killing  the Canadians – that they slowed down their advance  to the coast and Calais was saved.”

The battle is now commemorated by the Calgary Highlanders and by the Canadian Scottish Regiment (Princess Mary’s), who perpetuate the 16th Battalion, Canadian Expeditionary Force, as “St Julien 22nd of April 1915” with “the Glorious Memory of the 22nd of April 1915” which is the toast drunk at the St. Julien anniversary dinner with “Highland Honours.”

In the inter-war years, the Regiment existed as a battalion of the Non-Permanent Active Militia and carried out normal infantry training with such limited facilities as were available.  They were quartered at what has been the Regimental Home ever since 1917, Mewata Armoury.  During this time, a number of notable event occurred.  Perhaps the most important was the approval of His Majesty, King George V, of ;the alliance with the Argyll and Sutherland Highlanders (Princess Louise’s), in 1925.  This led to the adoption of the Argyll’s dress which was approved by HRH Princess Louise in 1932.  Also during this period, the Right Honourable R Bennett, PC, KC, LLD, MP, Prime Minister of Canada from 1930 to 1935, became the Honourary Colonel.  By General Orders 64 and 65/34, the Regiment along with the Canadian Scottish and the Winnipeg Light Infantry, were granted permission to wear a distinctive badge to commemorate St Julien.  For the Regiment, the badge consists of an oak leaf and acorn, with the letters CH superimposed, worn on both shoulder straps or sleeves of the uniform jacket.


Of noteworthy mention, is the fact that the Calgary Highlanders were the first regiment in Calgary to troop their colours.  This historical occasion took place in 1938. Also in 1938, on 24 April, the Right Honourable RB Bennett, presented the commemorative oak leaves to the Regiment.  On 8 May 1939, the Calgary Highlanders were chosen to present a guard of honour on the occasion of a visit to Alberta from their Majesties King George VI and Queen Elizabeth.  Not only did the Regiment proved the Honour Guard in Calgary but the regiment was rushed by train to Edmonton for the ceremonies in the provincial capital.

In September 1939, war came again.  Canada declared war on the 10 of September but the order for mobilization had already been given on 1 September when the Commanding Officer received a one word message, “Mobilize.”  The Commanding Officer, Lieutenant Colonel HH Riley, MM was declared medically unfit, so command was given to Lieutenant Colonel JF Scott, OBE, ED, Commanding Officer of the 15th Alberta Light Horse.  Recruiting began at Mewata Armoury on the 3rd September in Calgary and at other points in Southern Alberta.  By the 4th October, the Regiment was 20 men over strength.  The Regiment conducted its initial training on the Sarcee Camp.  On 29 March 1940 the Colours were laid up at the Cathedral Church of the Redeemer and on 25 May, the Regiment departed for Camp Shilo, Manitoba where it became a part of the 6th Infantry Brigade, 2nd Division and continued with more advanced training.  On 27 August, the Regiment departed from Halifax on the SS Pasteur, arriving at Gourock, Scotland on 4 September to begin more than three years of training in Great Britain.  The first taste of war was not long in coming.  The Regiment experienced its first air raid at 1100hrs on 5 September at Guillemont Barracks in South England.  On 6 September, the Regiment was issued its first equipment and underwent a change which was to have a profound effect.  The Fusilliers de Mont Royal of the 5th Brigade were sent to Iceland for garrison duty and it was decided to replace them temporarily with the Highlanders.  On 23 November, this change became permanent.


Life in England featured many training schemes.  The Regiment, under the command of Colonel Scott, rapidly became proficient and received commendations from numerous high ranking officers.  After a visit by the Commanding Officer of the 47th London Division in 1941, the Regiment started a form of training which was to become standard throughout the whole Canadian Army.  This was “Battle Drill,” which emphasized grueling physical training and realistic exercises under live fire.

On 19 August 1942, news was received that two Brigades of the 2nd Division – the 4th and the 6th  (along with the 14th Armoured Regt, Calgary Tanks) have landed at Dieppe.  Captain TM Insinger, a Calgary Highlander officer serving with the 2nd Canadian Division as GS03, was killed; the first casualty of the Calgary Highlanders in action during the Second World War.


The only part of the Regiment to go to Dieppe was the Mortar Platoon commanded by Lieutenant FJ Reynolds, which came under the command of the Royal Navy and which distinguished itself as the Calgary Highlanders in its new role of defending its ship, rescuing wounded from the beach and by making several trips from the beach to the hospital ship and return.  Sargeants Pittaway, Lyster, and Anderson mined the Pom Poms of their landing craft and shot down a Messerschmitt.  During 1942 and 1943, all four Rifle Companies of the Battalion received commando training in Scotland.  This training made them well qualified in the Storm-Assault role.  In 1944, Officer Cadet WL Lsyter of the Calgary Highlanders was the first Canadian to win the Sword of Honour at Sandhurst.


On 6 Jun 1944, D-Day took place.  On 6 July, the Advance Party of the Calgary Highlanders landed in France, followed the next day by the Battalion.  The first battle casualties suffered in Normandy were from German shelling on 12 July.  The Regiment was in its first battle on 19 July.  An independent battle action at Clair Tizon was the forerunner of the events that took place during the next three months.  During that time, the Regiment earned 14 of its Battle Honours. The Regiment was almost consistently in action until its last battle around the German town of Berne on 3 May 1945.

Typical of the actions fought by the Highlanders was the Battle of Walcheren Causeway on 31 October 1944.  Here, companies of the Battalion attacked successively across a 2000 yard long, 50 yard wide Causeway which was heavily defended and established without cover, a small bridgehead at the North end, which they held on to until relieved by the Regiment de Masionneuve.  This battle is now commemorated annually in the latter part of the month of October and it was chosen by the Regiment to represent all actions of the Calgary Highlanders during WWII.

“The battle reputation on the 10th Battalion made that night in 1915 (St Julien) was consistently upheld by the success of the Calgary Highlanders throughout the many months of fighting which led the First Canadian Army from the beaches of Normandy to NW Germany.  No Regiment of that Army came through that test with better record than that of the Calgary Highlanders.”


The Regiment left Holland for England on 24 September 1945 and finally arrived home on 24 November, where it was disbanded.  For its 1939-45 war service, the Regiment was awarded 22 Battle Honours, raising the total of its Battle Honours to 44 – a number equaled by few other Canadian regiments for their services in the two world wars.

Regimental Battle Honours
The Calgary Highlanders hold a total of 44 battle honours for service in two wars, a listing is as follows:

* These honours are emblazoned on the colours.
** You will be tested on these two particular battles in order to receive your glen and your kilt.

103rd Regiment (Calgary Rifles) a shield trident surmounted by a Tudor crown and overlaid at the point by crossed flint lock rifles carrying the number 103, surrounded by two maple leaf sprays.  In the centre, the word “ONWARD” over Foothill surmounted by a setting sun crowned with rays.  Scroll reads Calgary Rifles Regiment.

The Regiment was authorized to wear a special badge consisting of an oak leaf and acorn to commemorate the counterattack on “Kitchener’s Wood” North East of Ypres on the night of 22/23 April 1915 by the 10th Battalion, General Orders 64 and 65 1934.

March 23, 1932 General Order 29 authorized the Calgary Highlanders to wear distinctive regimental buttons bearing the cross of St. Andrew’s surmounted by a beaver, through the permission of Princess Louise, Duchess of Argyll, Colonel-in-Chief of the Regiment Argyll and Sutherland Highlanders.

“Glen Whorple.”  It is believed this tune was written by a Seaforth Piper early in World War Two.  It has been adopted by the Regiment since the war and sung at all Regimental functions.

The Regiment honours the anniversaries of: 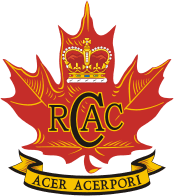 As the Maple, so the Sapling